The Internal Quality Assurance Cell of Dr. NSAMFGC, Nitte organized a guest lecture on the topic ‘Indian Constitution’ on 10th December 2021 at Souparnika Auditorium of NMAMIT.

Dr. Ananthakrishna Bhat, Retd. Professor, Canara College was the resource person on the occasion. He delivered a talk on the features of Indian Constitution. Addressing the gathering, he said, “We should be proud that people from our coastal region have represented in the constitutional council presided by Dr. Babu Rajendra Prasad”. He explained that our constitution was created in a historical, practical and observational methodology and has become the world’s largest constitution. He stressed that we can achieve complete freedom without harming the freedom of others. He also accentuated that India is a unionized federal government adopting a decentralized model of power with the bold stance taken by Sardar Vallabhbhai Patel. Under the Constitution of India, the head of the Executive is the President. All executive power is vested in him and all executive actions are taken in his name. He concluded by saying that the constitution of India provides parliament an opportunity to add, divide and modify clauses.

Dr. Niranjan Chiplunkar, Principal, NMAMIT presided over the program. He highlighted the importance of the constitution. He said that it is the duty of every citizen to abide by the constitution and respects its ideals. 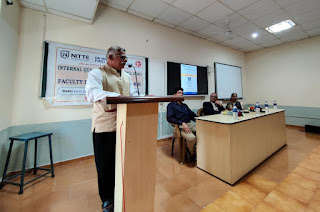